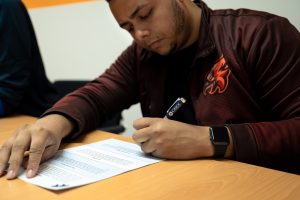 Recently, Fuego had the pleasant opportunity to travel to the Netherlands and journey through different cities such as Amsterdam, Rotterdam, and Enschede. They were able to visit several institutions and universities, including the dutch military. The main goal for Fuego to travel to The Netherlands was to get a different perspective on Esports (professional video gaming), and to find new opportunities for the community of Curacao and their team. The biggest highlight of the trip was the signed partnership with the University of Twente’s Esports Association (Esports Team Twente).

As the world continues to invest in professional video-gaming, it is important for us in the Caribbean to also stay up to date. As Fuego travelled to Enschede, they visited The University of Twente and met with the Esports Association’s team and their professor. They got a completely different perspective on how Esports is performed from an educational standpoint and received a tour through their facilities. The University of Twente’s Esports Association (Esports Team Twente) offers an introduction to career opportunities in the Esports industry, and also brings ways to optimize Esports performance by vinculating research and education into video gaming. The University is also starting a minor in Esports where students can make the choice to make it part of their education. The Professor of Esports in the University expects Esports to continue growing and creating more jobs worldwide. Fuego signed a beneficial partnership for both parties with the University of Twente’s Esports Association. This is a great opportunity for Fuego to be able to brainstorm ideas with the university and implement them in Curacao as well in the near future. Content creation will be done between organizations, which will boost the alliance to reach out further to greater partnerships and leagues. One great addition of the partnership is the opportunities the community of Curacao will gain through Fuego’s platform, which is focused on the antillean students studying in the Netherlands. Fuego’s members will have access to Esports Team Twente’s facilities. This means using their gaming lounge which will give them access to high end computers to be able to game, stream, or produce their own content. In addition, Fuego has thought out to bring the same type of research ETT has implemented and introduce it to the University of Curacao. It was a great discovery for Fuego to see how the esports industry opens doors for jobs in different areas such as IT, legal, marketing, computer science, and professional gaming itself. This gave Fuego the idea to enforce these career options in educational centers, such as The University of Curacao, and other Schools – especially knowing how many video gaming enthusiasts there are on the island.

Throughout the trip Fuego also visited the Dutch Marines and learned about their Esports department. The Dutch marines make use of video gaming to improve different skill sets such as communication, teamwork, leadership, strategy, execution and more. 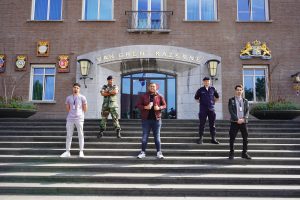 Fuego came to the conclusion that beneficial partnerships, such as the one with the University of Twente are the best way to bridge Curacao and The Netherlands through Esports. Being able to connect through esports is a tremendous possibility as it is everyday becoming a more prominent matter and day by day we have more gaming enthusiasm in our youth. The whole journey was filmed, and a docu-series will be published this month on Fuego’s YouTube channel. The mission of linking the Island of Curacao with The Netherlands through Esports, is increasingly beneficial for Curacao, not only to bring more awareness and education possibilities for our community for Esports, but also promote tourism and raise its economy through events, competitions, travel and more. This opportunity was definitely not achievable without their partners for this project: TUI Airlines, CINEX, Kolektivo, Concillium Group, and @OfficeToday.